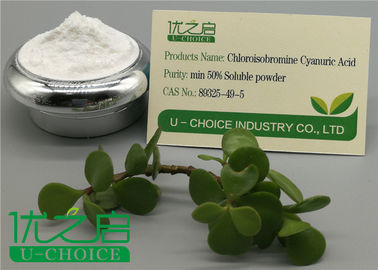 Chloroisobromine Cyanuric Acid is mostly used in agriculture at 50% content. It is a broad-spectrum, high-efficiency, pollution-free and environmentally compatible pesticide. It has both systemic and protective effects and can quickly and effectively kill fungi, bacteria, and viruses, which are harmful to crops, so it has special effects on crop diseases.

1. Chloroisobromine Cyanuric Acid, spraying on the surface, can release slowly the active ingredients of HOBr and HOCl. HOBr is about eight times more active than HOCl in the water, having strong ability to kill bacteria and fungi.

2. It can release the mother of HOBr through internal absorption conduction, forming DHT and ADHL, which has a strong virus-killing effect.

3. Chloroisobromine Cyanuric Acid not only has the strong ability to prevent and sterilize bacteria, fungi, and viruses, but also can promote the growth and nutrition absorption of crops.