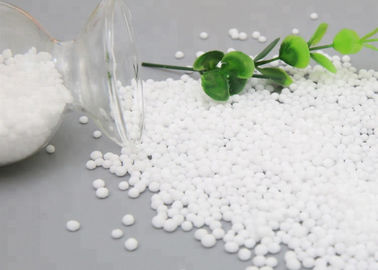 Urea, also known as carbamide, is an organic compound with chemical formula CO(NH2)2. This amide has two –NH2 groups joined by a carbonyl (C=O) functional group.
Urea serves an important role in the metabolism of nitrogen-containing compounds by animals and is the main nitrogen-containing substance in the urine of mammals. It is a colorless, odorless solid, highly soluble in water, and practically non-toxic (LD50 is 15 g/kg for rats). Dissolved in water, it is neither acidic nor alkaline. The body uses it in many processes, most notably nitrogen excretion. The liver forms it by combining two ammonia molecules (NH3) with a carbon dioxide (CO2) molecule in the urea cycle.

1. Used for separating nitrous oxide, nitrous acid and chromatography; also used as biological growth agents.
2. Used for the raw material of fertilizers, animal feed, explosives, stabilizers and the preparation of urea-formaldehyde resin.
3. Urea is an important raw material in the production of pesticides. It can be used for making fungicides such as cymoxanil, ethirimol, pesticides triazophos, phosalone, pyrimidines oxychloride, fenitrothion nitrile, tetramethrin, and some herbicides.
4. Used for the nitrogen fertilizer in agriculture; used as feed additives in industry; used for making explosives, stabilizers, and urea-formaldehyde resins, etc.
5. A crop fertilizer for improving the utilization of nitrogen content in urea.